The Cronulla Riots and National Identity

This essay is part of a media studies 1000 word take home exam for the subject “Social being – personal & social identities”. We had been studying various media around the race motivated riots which occured in Cronulla, including the well known 4Corners episode which interviewed the agressors in the riot.

Essay Statement: The Cronulla Riots are an example of the tensions between national identity and ethnic identity in Australia. Discuss.

What would happen if your television news only told us good stories of the world ‘outside’? How would our media report on ethnic ‘groups’, with whom we’ve had a history of conflict, if we relied on them for our survival? Would you have ever considered crossing the street in the presence of ethnic youths if the question wasn’t asked constantly as a measure of social acceptance of other groups? If we are not born like this, where do these ideas and stereotypes about national and ethnic identity come from and why do they create tensions between groups?

In this essay I will present evidence to show that the Cronulla riots are an example of tensions created by the political and media agendas of dominant and majority groups, or those in positions of social power. Much of the activity at the Cronulla riots can be attributed to alcohol, but given the documented evidence it is difficult to deny the significant contribution of politics and the media to the prolonged frustration and eventual eruption of the conflict. The media works directly with political agendas to report on controversial issues such as immigration, refugees and racially motivated violence which will inevitably lead to intergroup conflict.

The narrative of national identity is told through history, literature and popular culture (Hall 1992) as consumed by us through the media. Social identity is ‘that part of self-concept that derives from ones membership of social groups’ (Hogg 1995: 217) with tensions driven from fear of losing that identity and therefore membership to those groups. Stokes defines identity politics as the ‘contest over and conflict arising from claims to or about social or group identity’ (1997: 6) but that doesn’t tell us how identity politics come about, or who engineers the design or performance (Goffman 1990) of these identities.

The ‘need for a civic identity with rights and obligations’ (Kane 2001: 227) forms the basis of the political and media agenda which defines what national and civic identity is. The political and Government agenda is met through laws and regulations while the media agenda is driven by the sale of advertising space (Sinclair 2010:189). The former requires obedient citizens for society to run smoothly and the latter thrives on neatly sorted demographic groups to sell to advertisers.

The most obvious example of how the media are directly responsible for the Cronulla riots conflict can be heard in the 2GB radio broadcasts (Jones 2005) in the week prior. Alan Jones made a significant contribution to the tensions with statements such as “this lot were Middle Eastern grubs” with calls taken from listeners with similarly negative views about Middle Eastern groups. Accusations such as ‘they are taking over the beach’ were broadcast, validating the ethnocentric (Hogg 1995) ideals and discrimination from the callers with continued agreement from Alan Jones. However unethical, the broadcasts continued for over a week and culminated in an outbreak of inter-group violence fed by rumour and false information.

There’s nothing that is considered more unAustralian, or generally more opposed to the national identity of a nation, than the burning of the nations representative flag. A 16 year old boy, Ali Ammar, was sent to detention for climbing onto the roof of an RSL building and defacing the Australian flag, but the RSL made a positive statement by sending him to Kokoda (Compass 2007) to learn the value of the flag to those who had fought for its honour. He explains that ‘we just wanted to show how angry we were’ at being made to feel unwelcome in the country they were born and raised in, but didn’t realize the significance of the gesture until he witnessed ‘how much he had hurt people’.

Ali explains his childhood growing up in Australia to Lebanese-born parents by pointing out that he never had the same lunch as everyone else, but he knew no other country than Australia as his home. Dominant groups in each generation confine subordinate groups to the place in society which best suits the interests of the dominant group (Stokes 1997: 7) – in most social structures this consists of a combination of political and media organisations. Individuals like Ali are in a position where they don’t share the exact same national or ethnic identity as their parents or the same national or ethnic identity with the majority of their school peers. The minority or subordinate group feels frustration (Hogg 1995) at their lack of rights despite living in their country of birth, and the dominant group feels threatened by the potential loss of their rights to accommodate that of the subordinate group. 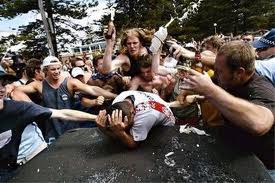 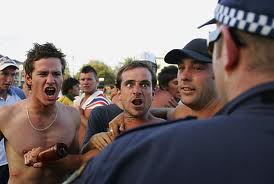 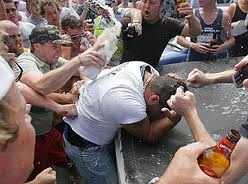 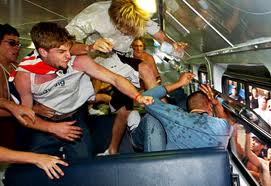 The actions of the Lebanese-Australians in Cronulla were falsely passed on like urban whispers (Four Corners 2006) by individuals and the media but were then unreasonably used as justification for negative attitudes, behaviours and violent actions towards the Muslim-Australian community in general – and specifically at the riots. This ethnocentric attitude exists in all groups where we naturally favour our own characteristics over the opposite characteristic. Limited attention has been given by the media to the issue of how to work towards overall acceptance of all Australians – they have generally reported on antagonistic aspects of the riots and the relationship between the groups and their conflicting national identities while suppressing (Parenti 1998) certain details through complete omission.

“In essence, difficult life conditions, real or perceived conflicts of interest, and certain cultural characteristics such as aggressiveness, ethnocentrism and obedience to authority – generate psychological processes and motives that lead one group to turn against another group.” (Plous 2003)

Frustration at the limited opportunities and social confinement can eventually lead the minority group to aggression (Hogg 1995) and uprising against the dominant social group. In contrast, the dominant group may feel threatened by the subordinate group and this may also lead to aggression. Antagonistic media broadcasts highlighting the negative qualities of minority groups combined with the social restrictions placed on them can inspire violent and aggressive behaviour as was seen in the Cronulla riots.

It is this need to protect our own interests, survival and place in society that lead the dominant group to create reasons why others don’t deserve the same advantages. The ethnocentric (Hogg 1995) attitude is applied to the social structures controlled by the dominant group such as media and politics, meaning political laws and media broadcasts are designed to benefit the dominant group. This leads to an imbalance in services, resources, information and entertainment available to subordinate groups which perpetuates the economic cycle of dominant and subordinate groups.

National identity and ethnic identity are ideological concepts constructed through a series of political and mass media processes designed to define ‘outsiders’ and ‘insiders’ (Stokes 1997). Ethnicity is considered to be the social and cultural group we identify with, sharing language, culture and history but Australia’s mixed multicultural background makes it difficult and unnecessary to clearly define groups based on ethnicity. In the case of the Cronulla riots, the assimilation of first generation Lebanese-Australians into the stereotypical Anglo-Australian beach culture hasn’t inspired multicultural celebration, rather frustration has created an escalating negativity that exploded in violence. The Cronulla riots are an example of tensions created by the political and media agendas of dominant and majority groups as shown by the evidence presented in this essay.