Is prejudice the result of a defective personality?

This assignment was one of those group things where you’re stuck with people who perhaps don’t have the same care factor? As a mature age student, I find it hard to work in groups with younger students. I enjoy the discussions, and like them as people, but I find myself caring about how much this education is costing me this time round and I want to absorb every bit of information and do well on assignments and tests. I remember the first time I went to uni – enrolling at 17, working in a pub by week 3 and meeting some bad influences. Classes weren’t important to me then, but they are this time around.

This poster ended up being a pretty poor assignment, and we got a 5 which was my lowest mark on any assignment so far. But the information contained within is useful, even if the statement is oversimplified for the purpose of an assignment.

Assignment Question: Is prejudice the result of a defective personality?

A defective personality is one that is considered sub-normal (Princeton University Wordnet) and imperfect, or that possesses a defect that sets it aside from a ‘normal’ personality. The statement above suggests that prejudice and discrimination are behaviours or personality traits of a small portion of the population, but this poster illustrates that all individuals in society are susceptible to socialisation which creates these behaviours and conflicts. 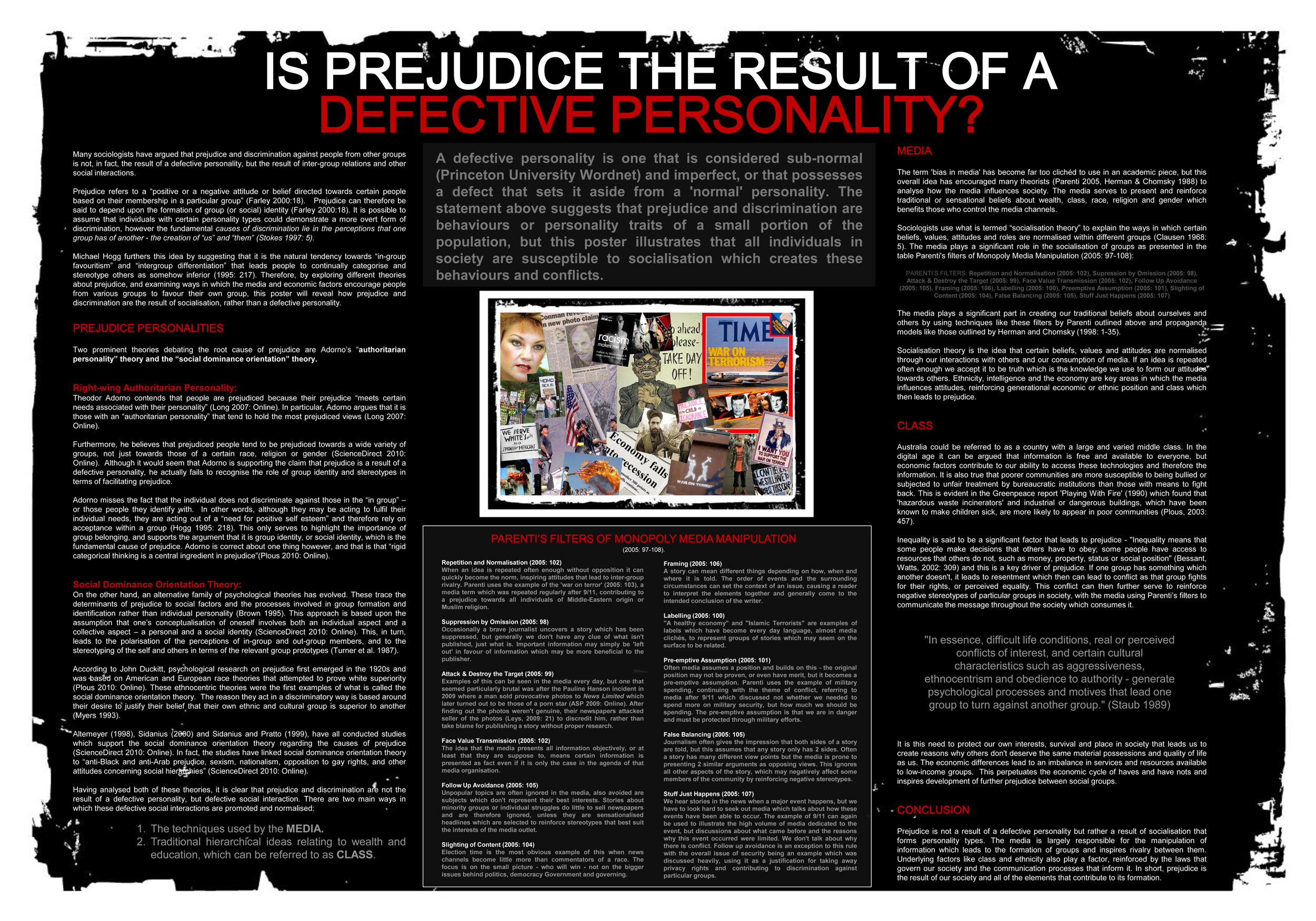 Many sociologists have argued that prejudice and discrimination against people from other groups is not, in fact, the result of a defective personality, but the result of inter-group relations and other social interactions.

Prejudice refers to a “positive or a negative attitude or belief directed towards certain people based on their membership in a particular group” (Farley 2000:18).   Prejudice can therefore be said to depend upon the formation of group (or social) identity (Farley 2000:18). It is possible to assume that individuals with certain personality types could demonstrate a more overt form of discrimination, however the fundamental causes of discrimination lie in the perceptions that one group has of another – the creation of “us” and “them” (Stokes 1997: 5).

Michael Hogg furthers this idea by suggesting that it is the natural tendency towards “in-group favouritism” and “intergroup differentiation” that leads people to continually categorise and stereotype others as somehow inferior (1995: 217). Therefore, by exploring different theories about prejudice, and examining ways in which the media and economic factors encourage people from various groups to favour their own group, this poster will reveal how prejudice and discrimination are the result of socialisation, rather than a defective personality.

Two prominent theories debating the root cause of prejudice are Adorno’s “authoritarian personality” theory and the “social dominance orientation” theory.

Furthermore, he believes that prejudiced people tend to be prejudiced towards a wide variety of groups, not just towards those of a certain race, religion or gender (ScienceDirect 2010: Online).  Although it would seem that Adorno is supporting the claim that prejudice is a result of a defective personality, he actually fails to recognise the role of group identity and stereotypes in terms of facilitating prejudice.

Adorno misses the fact that the individual does not discriminate against those in the “in group” – or those people they identify with.  In other words, although they may be acting to fulfil their individual needs, they are acting out of a “need for positive self esteem” and therefore rely on acceptance within a group (Hogg 1995: 218). This only serves to highlight the importance of group belonging, and supports the argument that it is group identity, or social identity, which is the fundamental cause of prejudice. Adorno is correct about one thing however, and that is that “rigid categorical thinking is a central ingredient in prejudice”(Plous 2010: Online). 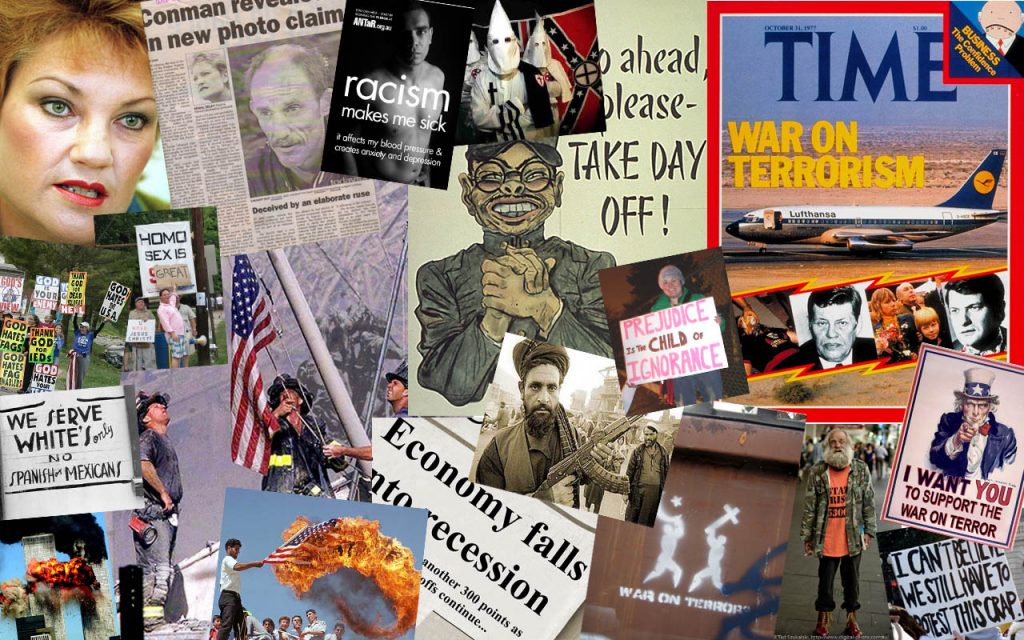 On the other hand, an alternative family of psychological theories has evolved. These trace the determinants of prejudice to social factors and the processes involved in group formation and identification rather than individual personality (Brown 1995). This approach is based upon the assumption that one’s conceptualisation of oneself involves both an individual aspect and a collective aspect – a personal and a social identity (ScienceDirect 2010: Online). This, in turn, leads to the polarisation of the perceptions of in-group and out-group members, and to the stereotyping of the self and others in terms of the relevant group prototypes (Turner et al. 1987).

According to John Duckitt, psychological research on prejudice first emerged in the 1920s and was based on American and European race theories that attempted to prove white superiority (Plous 2010: Online). These ethnocentric theories were the first examples of what is called the social dominance orientation theory.  The reason they act in a discriminatory way is based around their desire to justify their belief that their own ethnic and cultural group is superior to another (Myers 1993).

Altemeyer (1998), Sidanius (2000) and Sidanius and Pratto (1999), have all conducted studies which support the social dominance orientation theory regarding the causes of prejudice (ScienceDirect 2010: Online). In fact, the studies have linked social dominance orientation theory to “anti-Black and anti-Arab prejudice, sexism, nationalism, opposition to gay rights, and other attitudes concerning social hierarchies” (ScienceDirect 2010: Online).

The term ‘bias in media’ has become far too clichéd to use in an academic piece, but this overall idea has encouraged many theorists (Parenti 2005, Herman & Chomsky 1988) to analyse how the media influences society. The media serves to present and reinforce traditional or sensational beliefs about wealth, class, race, religion and gender which benefits those who control the media channels.

Sociologists use what is termed “socialisation theory” to explain the ways in which certain beliefs, values, attitudes and roles are normalised within different groups (Clausen 1968: 5). The media plays a significant role in the socialisation of groups as presented in the table Parenti’s filters of Monopoly Media Manipulation (2005: 97-108):

The media plays a significant part in creating our traditional beliefs about ourselves and others by using techniques like these filters by Parenti outlined above and propaganda models like those outlined by Herman and Chomsky (1998: 1-35).

Socialisation theory is the idea that certain beliefs, values and attitudes are normalised through our interactions with others and our consumption of media. If an idea is repeated often enough we accept it to be truth which is the knowledge we use to form our attitudes towards others. Ethnicity, intelligence and the economy are key areas in which the media influences attitudes, reinforcing generational economic or ethnic position and class which then leads to prejudice.

Australia could be referred to as a country with a large and varied middle class. In the digital age it can be argued that information is free and available to everyone, but economic factors contribute to our ability to access these technologies and therefore the information. It is also true that poorer communities are more susceptible to being bullied or subjected to unfair treatment by bureaucratic institutions than those with means to fight back. This is evident in the Greenpeace report ‘Playing With Fire’ (1990) which found that ‘hazardous waste incinerators’ and industrial or dangerous buildings, which have been known to make children sick, are more likely to appear in poor communities (Plous, 2003: 457).

Inequality is said to be a significant factor that leads to prejudice – “Inequality means that some people make decisions that others have to obey; some people have access to resources that others do not, such as money, property, status or social position” (Bessant, Watts, 2002: 309) and this is a key driver of prejudice. If one group has something which another doesn’t, it leads to resentment which then can lead to conflict as that group fights for their rights, or perceived equality. This conflict can then further serve to reinforce negative stereotypes of particular groups in society, with the media using Parenti’s filters to communicate the message throughout the society which consumes it.

“In essence, difficult life conditions, real or perceived conflicts of interest, and certain cultural characteristics such as aggressiveness, ethnocentrism and obedience to authority – generate psychological processes and motives that lead one group to turn against another group.” (Staub 1989)

It is this need to protect our own interests, survival and place in society that leads us to create reasons why others don’t deserve the same material possessions and quality of life as us. The economic differences lead to an imbalance in services and resources available to low-income groups.  This perpetuates the economic cycle of haves and have nots and inspires development of further prejudice between social groups.

Prejudice is not a result of a defective personality but rather a result of socialisation that forms personality types. The media is largely responsible for the manipulation of information which leads to the formation of groups and inspires rivalry between them. Underlying factors like class and ethnicity also play a factor, reinforced by the laws that govern our society and the communication processes that inform it. In short, prejudice is the result of our society and all of the elements that contribute to its formation.

Ervin Staub “The roots of evil: the origins of genocide and other gorup violence” 1989