Warning: "continue" targeting switch is equivalent to "break". Did you mean to use "continue 2"? in /var/www/vhosts/carlajayne.com/httpdocs/wp-content/themes/Divi/includes/builder/functions.php on line 4783 History repeats: the culture industry of 1944 | Carla Jayne

History repeats: the culture industry of 1944

It’s long past time to clean out my office, so of course I’m here buried in a pile of old work files and uni papers, lost in the pages of media studies and social science readings of my abandoned dual degrees.

On top of the pile was a reading from Frankfurt School in 1944 by Theodor Adorno and Max Horkheimer titled “The Culture Industry: Enlightenment as Mass Deception. 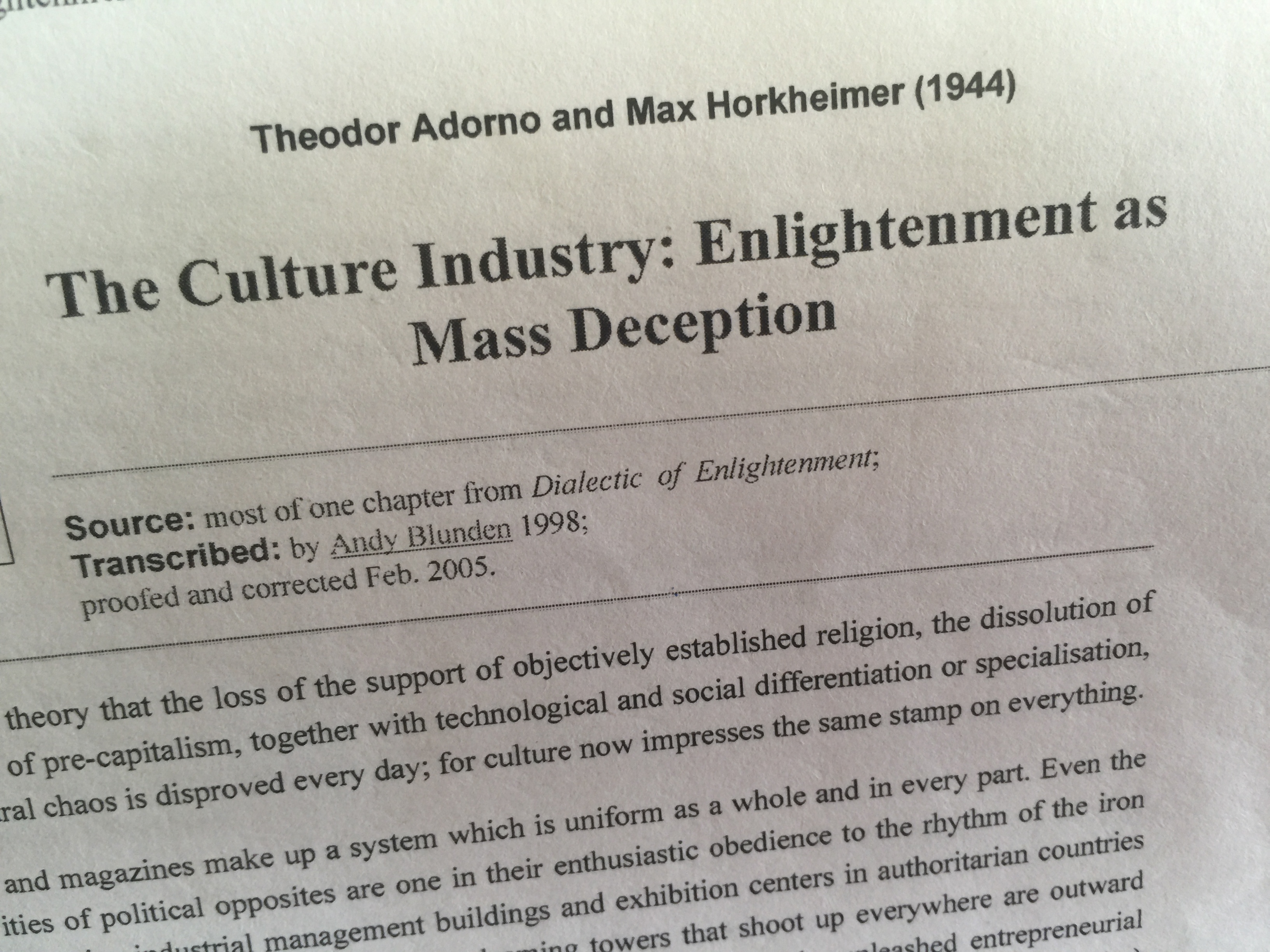 The chapter talks about the illusion of choice in capitalism, but takes it a step further to suggest that much of what we believe to be historically relevant culture or religious traditions could be manufactured to differentiate what is generally the same.

The examples of the power dynamics of steel, petroleum, electricity and chemicals (Adorno, 2) companies in 1944 bare a striking resemblance to manufacturing, tech, and media entertainment industries of today but it is here that the author reveals his bias towards a historic utopia.

Throughout, the author suggests that real culture was replaced with dishonest replicas. That real live jazz and the quality of a Tolstoy novel were ruined by the manufactured ‘broadcast soap operas’ which were ‘no more than useful material for showing how to master technical problems’.

But perhaps the most relevant to our current political and media climate is the claim that this mass produced content was presented as being demanded by the audience. A point that 1944 was also considered ‘hot air’ from the companies profiting from this mass manufacture of culture. 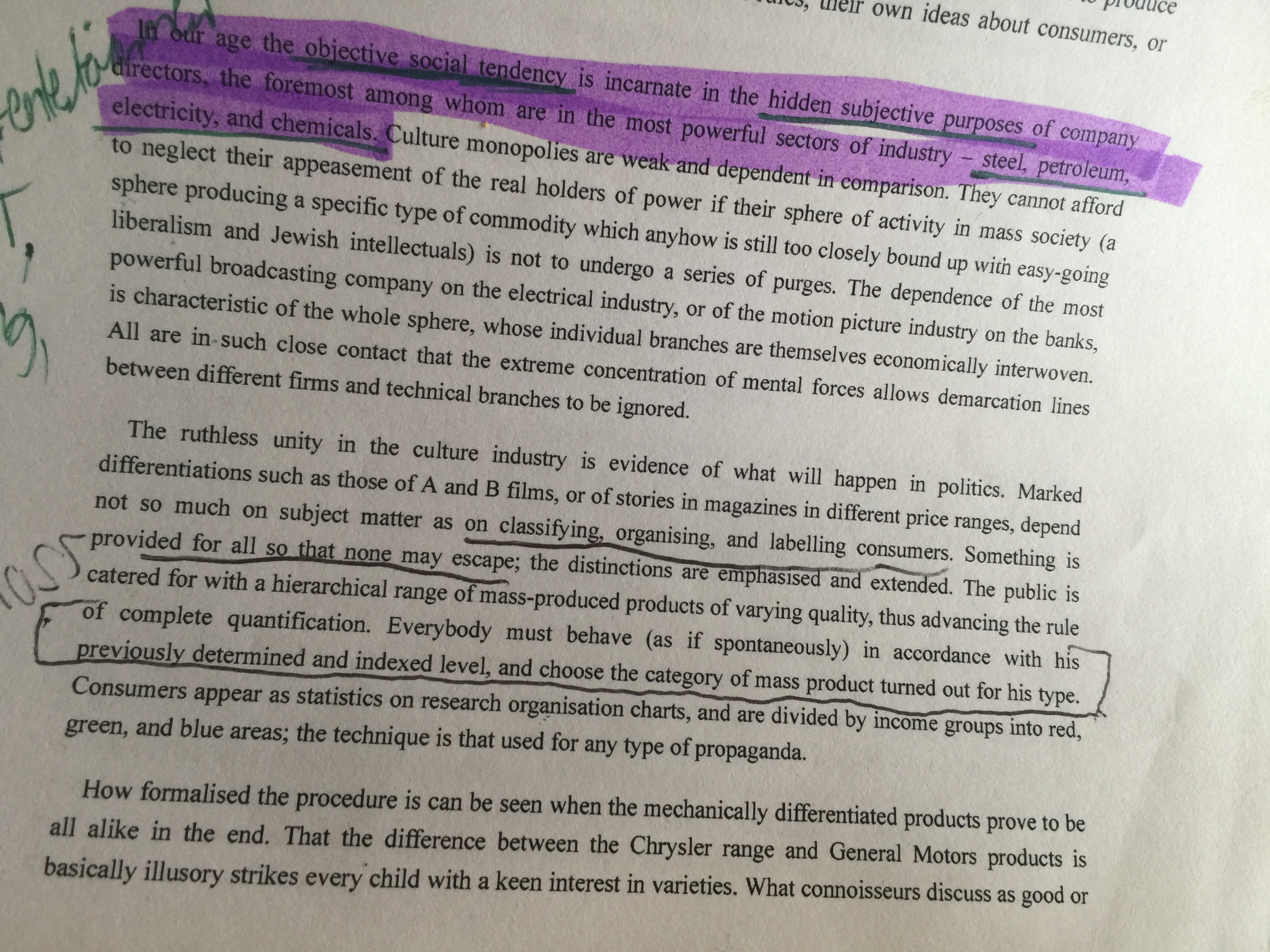 Perhaps we could use this 80 year old experience of manipulation versus agency, choice versus ideology to understand the political climate and social structures in a PT (post trump) world.

The author of this paper is quoted in articles like this, academic credibility unquestionable with The Frankfurt School in the title of papers used to develop public policy and understand humanity since their original production in the roaring 40s.

But in reality the author sounds like a grumpy old man, annoyed that the young kids want to use jazz in a way different to his ingrained expectations. He is annoyed that a novel from an author he respects would become a moving image or that jazz might be used in a broadcast, minus the vibe of a live performance. He seems to be suggesting that jazz broadcast on TV or via radio is a fraudulent representation of the live reality of jazz, oblivious to the rest of society who might not have experienced jazz at all.

It’s a sign of the elitism that often exists when privilege makes an activity or opportunity accessible to only a small group for a long period of time, but eventually a new technology is developed to make the opportunity more accessible. This loss of uniqueness in a class based society can lead to conflict, which in this case uses a loss of authenticity of live jazz culture as an excuse to be elitist about what jazz should be.

Live Jazz was manufactured once too. It was once resisted as noise replacing other cultural norms like classical symphony or opera. But if the author knows live jazz as a default, having never experienced a time before it was the norm, it is easy for him to assume that his experience of culture is the base line.

There’s nothing wrong there until the suggestion that others accessing jazz in different ways is a loss of culture rather than an evolution of it. This habit of making up a tradition in 1 generation and expecting the next generation to accept it as a long standing practice without alteration is ridiculous. Some examples…

Live jazz doesn’t have to end for broadcast jazz to exist. The economy will change as others access it in different ways and we all evolve with it. It’s losing this acceptance of the individual right to access culture that allows the type of consolidation the author suggests is problematic. It’s disrespecting each other’s right to access jazz within our own means that lets big business and government turn us on each other.

While we argue amongst ourselves about who can access jazz and how, arts funding has been slashed and politicians found more money for war.